There are so many espadrilles around these days, how can you tell which ones are the “real deal”? And, more importantly, why should you care?

Thanks to Diego Arnedo of the www.espadrillestore.com, North Americans have access to espadrilles that are produced in the heart of Spain, by the skillful hands of the people from the village of Cervera del Rio Alhama, in the region of La Rioja.

There are many reasons to care. Espadrilles from Cervera del Rio Alhama (it is a collective brand that produces espadrilles for several different companies in Spain, as well as for www.espadrillestore.com) are made by hand according to the traditional, time-honored methods. That means that they are quality. The sole is not glued to the rest of the shoe, it is sewn with strong natural fibers. The textile upper doesn’t last forever,  of course, but that is the charm of the espadrille: the canvas is utterly breathable, does not misshape the foot, comes in a great variety of colors and patterns, and…. the price is not prohibitive, so it’s easily replaced when it’s worn out. The essence of the espadrille is its hardiness and its usability. Its anatomically friendly design makes it very comfortable, almost as comfortable as bare feet, only more protected.

Diego and his team have created a terrific website that ships everywhere in North America  (they also have a website for European customers) and where you can also find the story of the espadrille and videos introducing you to people who make the espadrilles today. More recently the company opened a brick-and-mortar store called  “L’Espagne a vos pieds” (“Spain at your feet”) located at 4518 Rue Saint-Denis, Montreal, Canada.

Espadrilles can be worn both by women and men, and by kids, of course. The Espadrille Store carries them all. The price ranges from $31.50 for flat espadrilles to $60-70 for high heel ones. There are frequent promotions offering free shipping (it’s always free on orders over $75) and discounts.

I bought three different espadrilles from The Espadrille Store last year and wore all three last summer. On a trip to Germany last July I decided to walk the Way of St. James (the famous “Camino de Santiago”) – a medieval pilgrimage route to Santiago de Compostela in Spain, a major shrine during the Middle Ages and still very popular today. The network of roads used to extend all over Europe. The German part has recently been brought back to life and pilgrims can walk the marked paths that cut across fields, forest, small villages, and major cities. It was amazing! The red and white Pamplona espadrilles carried me over forty kilometers in two and a half days and NOT  A BLISTER. Have I mentioned how pretty they are, with their red lacing? A girlfriend of mine told me that my feet looked like nicely wrapped Christmas presents. What do you think? This is them, Day 2, perched up on a hunter’s blind, resting, in the Steiger Forest, Franken region, Bavaria.

At the end of the journey, I also dropped in on a horse farm, where I walked through even marshier fields and had my foot stepped on by a very friendly one-year-old Hanoverian stallion. All I had to do with the espadrilles afterwards was to wash them with a hose and dry them in the sun. They can also take the dryer. And they were pretty once again!

Here are some of the other models that are sold through the Espadrille Store: 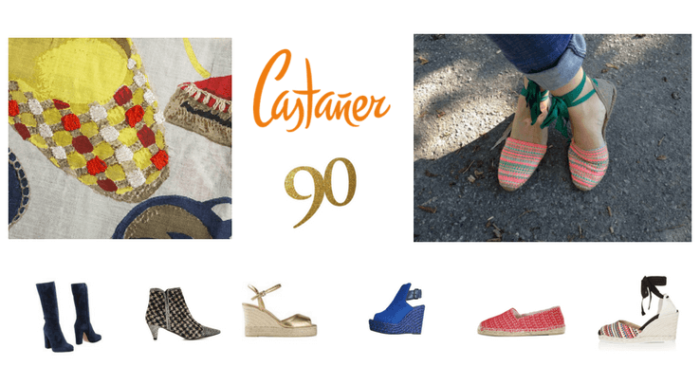