Watching the new Spanish Netflix period drama “Cable Girls” (which is available on Netflix dubbed into English and with English subtitles) drew me closer the “roaring 20s“, known in the fashion world as the “flapper girl” era. Even if at times my interest in the plot drifted, I couldn’t take my eyes off the screen because I was intrigued by what the girls were wearing – day wear, evening wear, shoes, of course, but also 1920s vintage hats and other head accessories.

In the 1920s women wore “cloche” hats, shaped like a bell. It’s hard to imagine that they were meant to flatter, but the times dictated that “It” girls should be wearing their hair short and flat. The close-fitting “cloche” hat wouldn’t fit over long hair, so you either had to part with your tresses or be unfashionable, as simple as that.

Of course, there were other head accessories, much more interesting than the “cloche“, which is, after all, a humble every day hat. Thankfully,  Helena Sanchis, “Cable Girls” chief costume designer, is known for her terrific fashion flair, as well as a great sense of historical detail. She outfitted her “cable girls” with a number of beautiful 1920s vintage hats and accessories (most of which are replicas, of course, but it doesn’t matter).

In this shot Carlota, the cable girl, and Sara, the switchboard manager, are wearing jewel-colored hats as beautiful as a ruby and an emerald – two gems of great mutual attraction. In the series, Carlota and Sara are more than just friends, so maybe by choosing these colors the designer is hinting at how truly precious their relationship is. All allusions aside, Carlota’s burgundy red velvet beret looks very striking against her wheat blonde bob and Sara’s elegant emerald-green felt hat really accentuates her gorgeous red-brown curls.

To parties, 1920s “It” girls often wore head chains. This gave them an exotic, sexy look, which is exactly what they were going for. A 1920s head chain typically consisted of sparkly beads and rhinestone chains of varying sizes and an accent piece on the side. Lidia from “Cable Girls” looks very nice in hers.

Headbands were all the rage in the 1920s. In this night club scene Carlota is wearing what looks like a glitter-encrusted headband topped with a tall white feather. It’s basically a “fascinator“, a decorative headpiece that you fasten to your hair at weddings and other formal events. When I think of a fascinator, the first image that comes to mind is that of some British royal, but these days more and more designers dedicate themselves to reviving the art of millinery (hat making) for us, regular folks. If you dare, a beautiful and well-chosen head piece can create a very special mood and shine the light on the best aspects of your personality.

I recently came across a modern day version of a feather embellished head band/fascinator, similar to the one Carlota in “Cable Girls” is wearing. What looks like a halo of feathers is actually a combination of silk and organza strips mounted on a light wire frame. This is the work of Gema Galdón a Barcelona-based designer, owner of the Les Catherinettes artisan millinery boutique. Her brand offers a very interesting range of hats and other head accessories. A daring artist, Gema Galdón uses a variety of styles, shapes, and materials to amazing effect.

This headband, wire mounted and made of velvet flowers and leaves, would be at home in a flapper girl‘s accessory chest.

The minimalism and sophistication of pure white or white with a contrasting black abstract pattern was a trait shared by many European fashion designers from the 1920s and 30s. The woolen berets of the Barcelona-based designer Gema Galdón are timeless pieces. They could have easily been included in the line-up of vintage hats that helped recreate the restless and flamboyant atmosphere of the “Cable Girls” era. 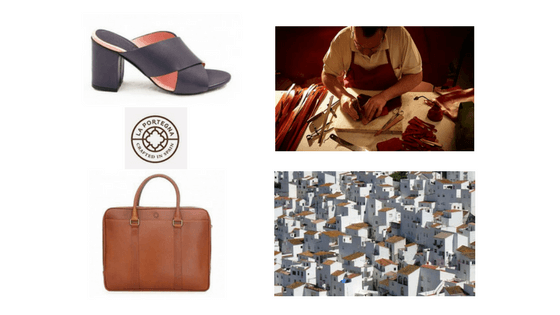