Elsa Schiaparelli, an Italian in Paris, was a fashion designer and founder of the Schiaparelli haute-couture house.

She was the author of many avant-garde fashion pieces, like the famous shoe hat, which she created in collaboration with the Spanish-Catalan artist Salvador Dalí.

Schiaparelli loved to insert provocative elements into her clothes, like the gold-thread embroidered lips on the suit jacket above.  It is not a coincidence, of course, that the year before, Dalí had created his famous Mae West Lips sofa.

Like Dalí, Schiaparelli keenly felt the frailty and absurdity of her time. Her signature silhouette: angular, slender, with strongly defined jutting shoulders was designed for the new, raw reality of post-war Europe. At the same time, those who could afford to escape the harsh conditions enjoyed the atmosphere of non-conformism and experimentation that reigned in the arts.

In the same year that the shoe hat was created, Schiaparelli and Dalí came out with the “lobster dress”, a sexual dream turned haute-couture sensation. It was soon snatched up by no other than Wallis Simpson, who wore it during her honeymoon with the Duke of Windsor, who had briefly served as Edward VIII of England.

More than a half-century after her fashion house folded, Schiaparelli continues to shape the imagination of fashion designers. In 2010 Christian Loubotin created his own version of the iconic shoe hat for the famous Spanish actress  Rossy de Palma.

It is impossible to name all western fashion designers who were directly or indirectly influenced  by Elsa Schiaparelli. Madrid-based Agatha Ruiz de la Prada and Barcelona-based fashion houses of Custo Barcelona and Desigual have some Schiaparelli in them for sure.

Maison Schiaparelli itself was revived a few years ago by the Italian fashion magnate Diego Della Valle. To the surprise of many, it was relaunched as a classic haute-couture fashion house. It is not very clear whether this experiment will stand, but the creative director, Marco Zanini, seems promising. A young, but experienced designer with a distinct non-conformist streak, Zanini is in awe of Schiaparelli and is relishing the chance to follow in her footsteps. The latest Fall-Winter collection was shown at the Paris Haute Couture Week in July 2017.

With its abstract patterns and transparent organza, this beautiful dress is the haute-couture relation of street-wear oriented fashion by Custo Barcelona. How close it comes to Elsa Schiaparelli, it’s hard to say. The designer definitely wanted to underscore Schiaparelli‘s Spanish connection: some dresses have Spanish and Catalan names, others display designs based on the art of Dalí and Picasso. The one below is named after Picasso’s lover and muse Dora Maar.

The “Dream of Luxury” dress features a big pink heart, so prominent in the collections of Agatha Ruiz de la Prada.

No new versions of the shoe hat have so far been presented – a pity. Maybe it was considered too much of a throw-back. After all, the label has to evolve. That said, any kind of hat would have been nice. Maybe we’ll see more head accessories in their next winter collection. In any case, best of luck to Marco Zanini and Maison Schiaparelli 2.0! 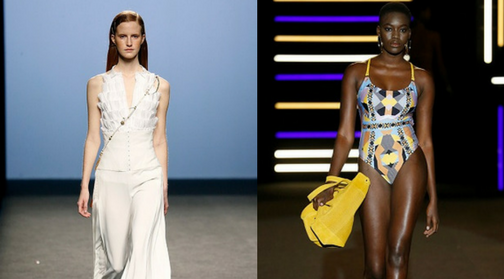 Crossing the Waist Line in Madrid