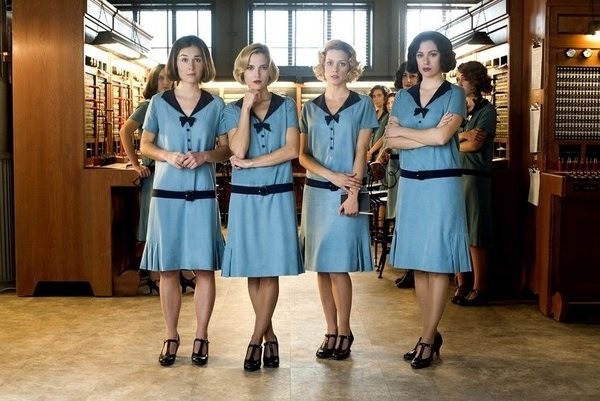 Not since the “Great Gatsby” have vintage heels and other accessories been given as much screen time as in the new Netflix series “Cable Girls” – a 1920-30s period drama set in Madrid, Spain. The four women at the epicenter of the drama work as cable girls for the Telephone Company known simply as Telefónica. (Telefónica is Spain’s AT&T – a telecommunications giant and media company).

Fashion plays a big part in the story, helping to flesh out each girl’s personality and background. The show’s chief costume designer, the acclaimed Helena Sanchís, went to great lengths to make the clothes and accessories look as authentic as possible, even using originals for some of the evening scenes. The rest are replicas, of course, including the shoes. The beautiful vintage heels are vintage in name only, having been made to order by some very expert hands.

When we say “vintage heels”, we usually refer to a closed toe heeled shoe with straps forming a T or a Y and a side buckle fastening. This kind of shoe is called a T-strap (or T-bar) pump. An attractive and practical option, it’s ideal for Madrid’s temperate dry climate and meticulous sense of style.

Spanish women of all incomes always try to put their best foot forward and the 1920s were no exception. Shoe makers did the best they could with the materials at hand. Unsurprisingly, it’s the well-heeled Carlota, the daughter of a high-ranking military man, who has the best shoes and accessories closet. She is followed by Angeles, a working wife and mother, whose husband makes a good salary as a technical director. Marga, the village girl, is the most modest one.

I love Carlota’s bronze and black heels – not too glitzy, but clearly meant for the evening on the town. In the close-up below Angeles is putting on a D’Orsay style nude suede T-strap pump with matching leather piping, contrasting floral side print, and a slightly curved medium heel.

There is a big contrast between the two friends’ shoes. Marga is wearing simple brown heels, adorned with two earthy-toned metallic leather strips in the front. They point to her background as an ordinary village girl who is trying to make it in a big city. Even though Carlota’s heels are a lot more expensive, supple leather and minimalist design give Marga’s shoes their own understated kind of beauty.

The leading lady, Lidia, is the sexiest and most mysterious of the four. With the help of sequin and lace dresses, luxurious shoes, satin gloves, and sparkling head bands she can transform herself into a true “flapper” fashion icon a moment’s notice. Lidia is “Charlie’s Angel”, James Bond, and Robin Hood all mixed into one. Glamorous, brave, and a brilliant schemer, she doesn’t think twice about breaking the rules in order to get herself and her girlfriends out of their many predicaments.

Thanks to lavish period dramas  like “Downton Abbey” and “Cable Girls“, vintage heels and accessories from the “flapper” era have rekindled an interest in 1920 and 30s fashion. It was a special time and a special kind of femininity. Women were liberating themselves from many inhibitions that hindered them in their private and public lives. Fashion designers, artists, and intellectuals  worked hand in hand to shore up humanity that seemed almost lost in the wake of a devastating world war. Street style fashion of the day may seem somewhat naive or even funny to us now, but it gave women a lot more freedom to enjoy themselves than the tight corsets, full skirts, and big hats of the pre-war era.

I’m not a fan of the bell-shaped “cloche” hat, but I can definitely see that a girl would get a lot further a lot faster with one of those on her head than with a spectacularly decorated wide brim creation. (Not wearing a hat at all was not an option yet, of course). As for the shift dresses, they may not have flattered every figure, but they were non-fussy and they encouraged movement. In the 1920s and 30s many urban women started participating in sports and generally became more active. And then there was the Charleston and other type of dances that required “kicking up your heels”.

The T-strap pump has never really gone out of style. Instead, it keeps getting reinvented for each decade and not only as a dance shoe. Elegant and balanced, it gives shoe makers a lot of room to play. You can go from a full coverage everyday version to a light glamorous evening version with only a few modifications.

Martinelli is another Spanish brand that specializes in dressy evening shoes. The designers must have had vintage heels on their mind when working on the brand’s 2017-2018 collection. Theirs is a more sophisticated version of the T-bar pump, with an extra set of straps and a stylized bow over the crossing point. This model is similar to the bronze and black vintage heels seen on Carlota (see image above), but more glamorous. Martinelli was the official brand of the 2017 Goya Awards, Spain’s equivalent of the Oscars.

This black glitter stiletto ankle boot by the luxury high-heels maker Pura López also looks like it was touched by the spirit of the “flapper” era. Lidia wears a similar pair in one of the scenes of “Cable Girls“. This is a step up from the T-strap pump – glamorous society women wore a lot of glitter and metallic models with pointy toes and spiky high heels. Whatever the design, some kind of ankle support was always present to hold the foot firmly in place. In the 1920s and 30s fashion this pair of high-heels by Pura López would have probably been classified as a normal high-end evening shoe – I don’t think that the term “ankle boot” even existed back then. By the way, these “vintage heels” are currently available at YOOX for a great discount price of $96.

In the next post, I’ll look at 1920s and 30s inspired accessories. Made in Spain, of course.

Ann Mailsi is a writer and social media buff based in the Greater Toronto Area, Ontario, Canada. Her interests include fashion, technology, and nature adventures.
Facebook Instagram Pinterest Wifi Twitter
PrevPreviousBrilliant Stilettos To Ring In the New Year
NextVintage Hats in “Cable Girls”Next 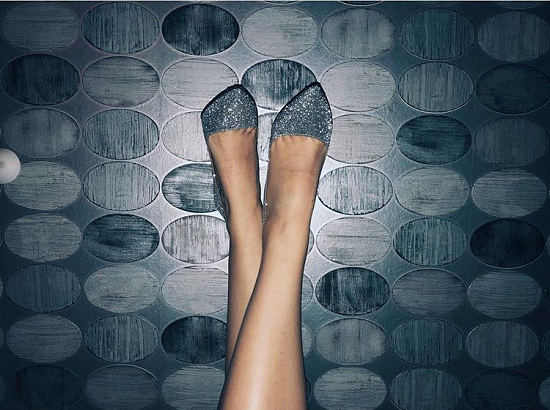 Brilliant Stilettos To Ring In the New Year